Venerable Swiss brand Patek Philippe is no stranger to pushing the boundaries of mechanical chronograph design. The brand’s chronograph offering dates back to 1856, with split-seconds wristwatches appearing in the catalog as early as 1923. Despite this history of innovation, Patek Philippe never offered a wristwatch capable of measuring 1/10- seconds intervals – until now. Released in a surprise announcement following the close of Watches and Wonders 2022, this new model brings one of the sportiest designs ever to the Calatrava platform and incorporates no less than seven patented innovations into its complex new in-house movement. The new Patek Philippe Ref. 5740P is an impressive blend of ornate movements with a sleek and eminently wearable design and stands as an appealing symbol of the brand’s enduring prowess in chronograph construction. 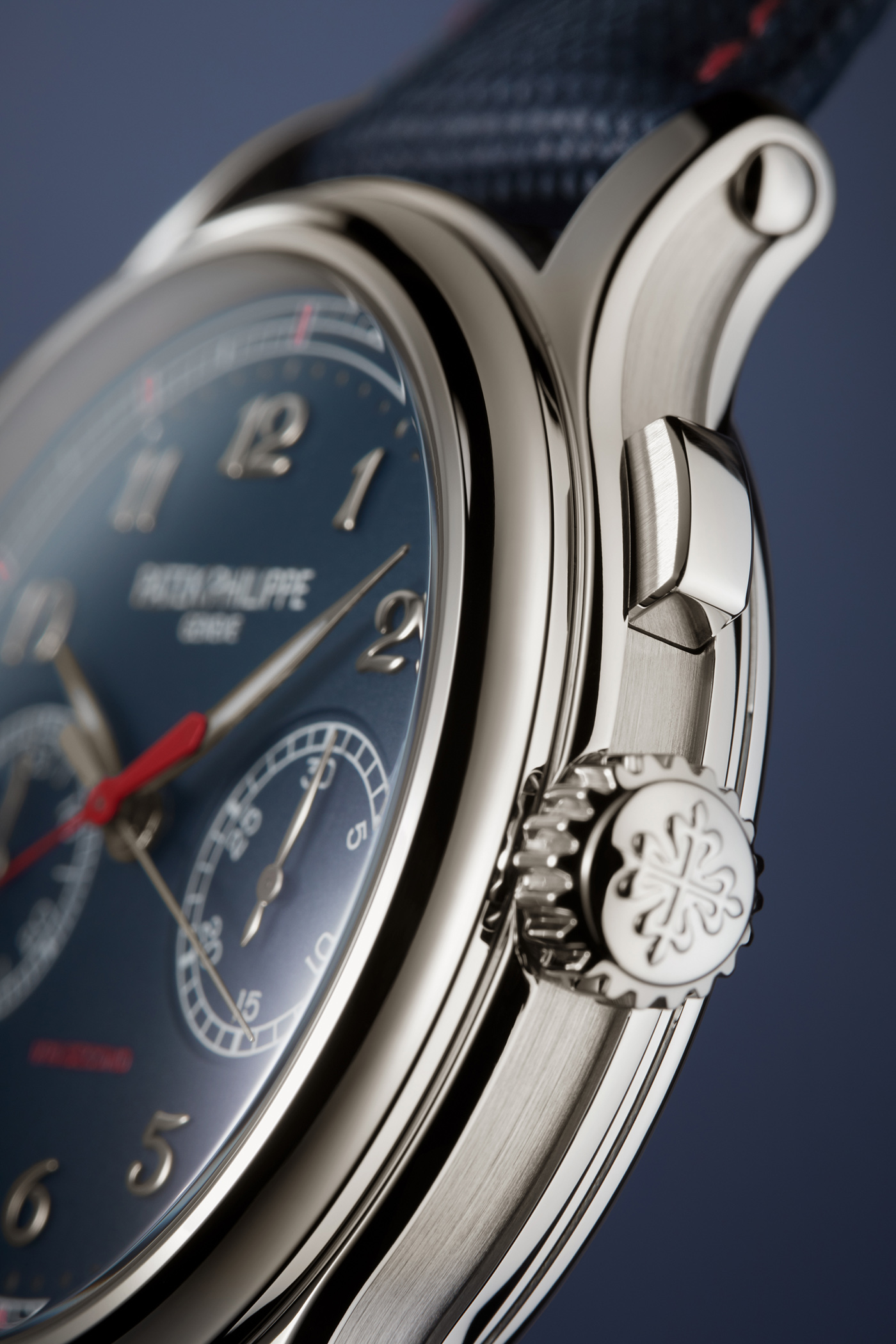 While most models with exotic complications tend to become bulky and unwieldy on the wrist, one of the Patek Philippe Ref. The basic principles of the 5470P are easy portability. As such, the 950 platinum case measures 41mm wide and 13.68mm thick. The Ref. The overall silhouette of the 5470P follows the classic Calatrava pattern, but Patek Philippe gives this familiar design a much more modern and athletic feel in images through subtle tweaks and unique visual cues. The case’s flowing sides and slender down-facing lugs get a recessed cut-out treatment here, both removing the visual weight of the case design and featuring a contrasting brushed segment to break up the mostly polished case shape. on the wrist. Polished circular cabochons on the tips of the lugs lend some visual weight back to these elements, helping to give the light, dressy design a greater sense of solidity in the images. The concave polished bezel also helps give this simple platform a sense of depth, creating a highlight around the dial without the added visual bulk of a traditional rounded smooth bezel. It’s the single rectangular pusher at 2 o’clock, however, that hints at this watch’s sporting ability. Monopusher designs are something of a rarity in today’s chronograph landscape, and Patek Philippe enhances this traditional shape with characteristic understated elegance by introducing vertically contrasting brushed sides flanked by smooth chamfers and a polished outer face. Along the 6 o’clock side of the case, the brand includes its traditional diamond cabochon, marking this unassuming case as a platinum model with a neatly executed fanfare in pictures. While this case is certainly sporty for a Calatrava-based design, its tiny 30-meter water-resistance rating should keep this model away from strenuous activity. 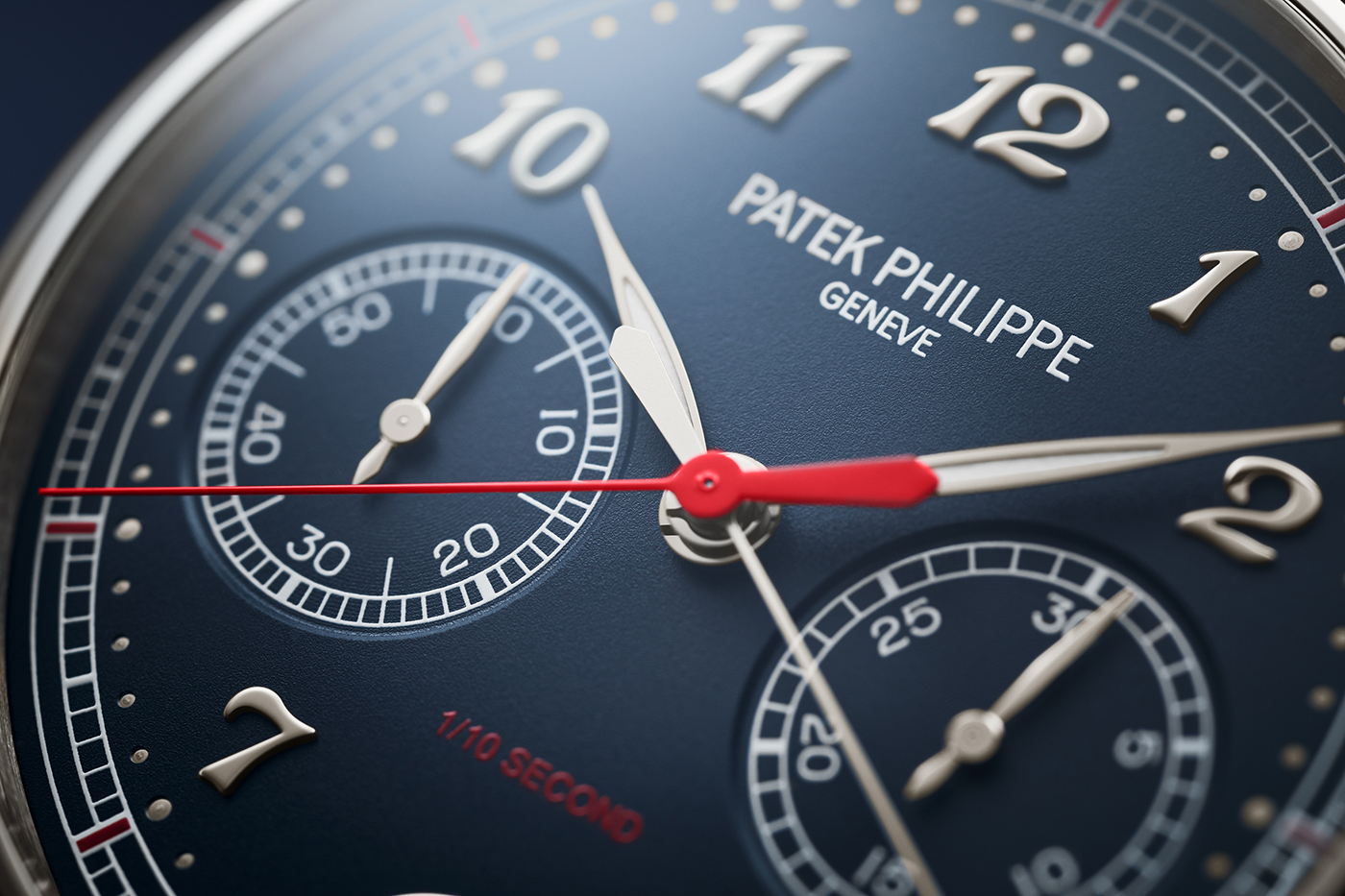 Like the case, the dial of the Patek Philippe Ref. 5470P alters the visual themes of the Calatrava for a more modern and sporty effect, but here the brand also smoothly incorporates a unique approach to the chronograph complication. The rich matte navy lacquer of the main dial surface provides a clean backdrop for the overall design and interacts well with the bold red highlights of the images. The overall layout is a sleeker take on classic Calatrava elements, with luminescent 18k white gold leaf hands, applied white gold Breguet numerals, and a striking white gold inlaid minute track. The outer seconds scale functions as a cross between a traditional scale railway track and a checkerboard scale, with markings alternating between an inner and outer ring every five seconds, separated by demarcations in fiery red. Patek Philippe houses the Ref. The 5470P’s recessed sub-dials slightly below the centerline of the dial and provide both the seconds display at 9 o’clock and the chronograph minutes sub-dial at 3 o’clock with a classic blend of light azure finish, printed white railroad scales and polished white gold leaf hands. in images, in pictures. When the chronograph is not in use, this dial appears more or less like an exceptionally sporty riff on classic Patek Philippe chronograph themes, but once the monopusher is engaged, this design reveals its hidden complexity. The Ref. 5470P uses not one, but two central chronograph seconds hands mounted one below the other. This arrangement is not entirely new, especially in rattrapante creations, but the execution of Patek Philippe should make these paired hands a unique spectacle on the wrist. The rhodium-plated stainless steel lower chronograph seconds hand operates normally, making one revolution of the dial once per minute. The upper chronograph seconds hand, made from pure Silinvar silicon and painted red (using a PVD primer and a lacquer painting process patented by Patek Philippe specifically for this model), travels the dial once every 12 seconds to do 1/10 of the chronograph. – second recording capacity easily readable at a glance. This unusually fast sweeping red hand should be an eye-catching display and an immediate conversation starter among enthusiasts. 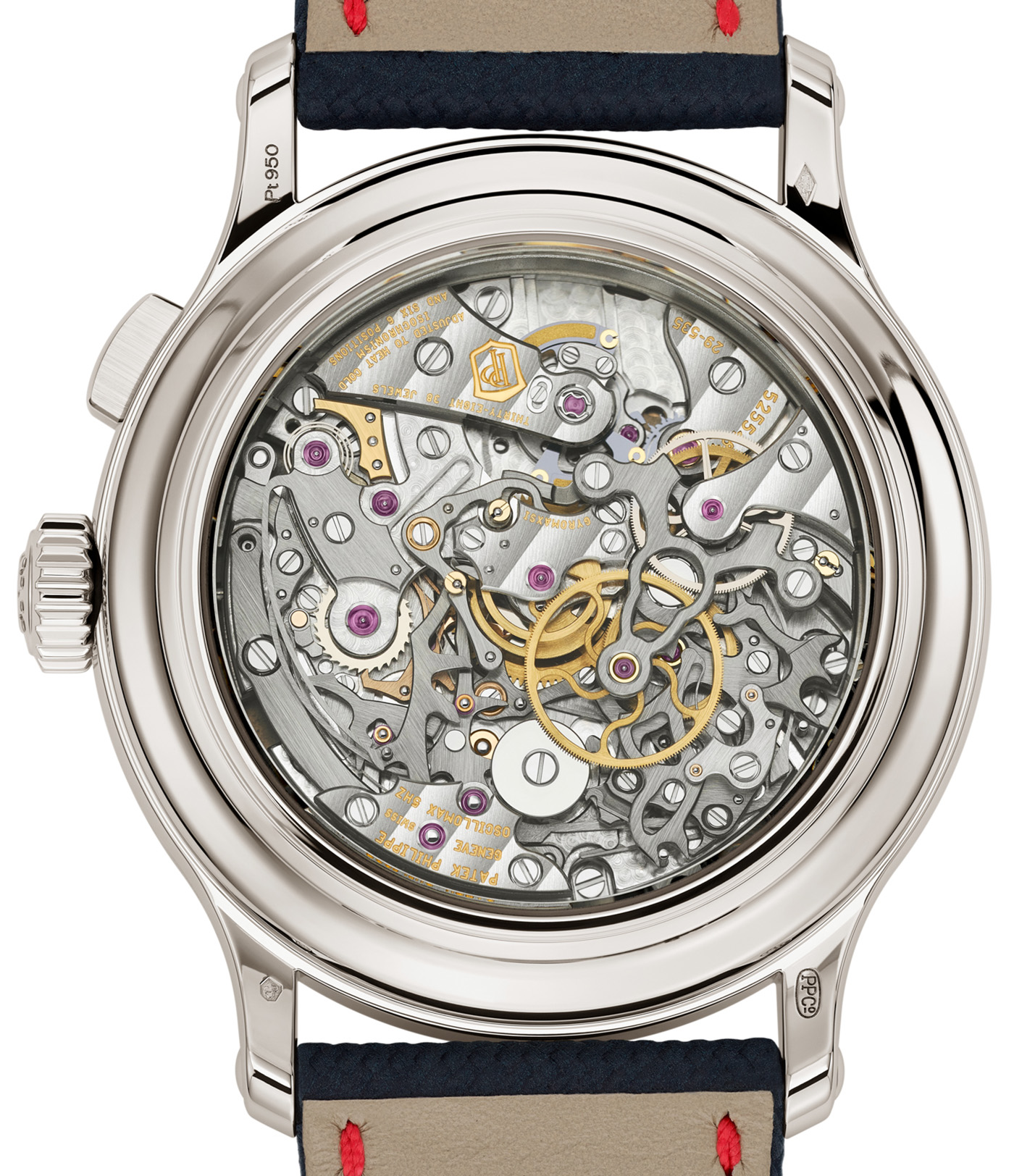 Including the previously mentioned silicone paint system, the new Caliber CH 29-525 PS 1/10 hand-wound chronograph movement inside the Patek Philippe Ref. The 5470P includes seven patented innovations. These range from a concentric chronograph seconds display to a notched spring barrel arbor, which allows the mainspring hook tension to be reduced during winding, as well as a narrower barrel arbor and coils tighter mainsprings for increased power storage. Other patented components include a two-stage anti-backlash chronograph seconds driving wheel with flexible and rigid spokes, which prevents hand vibration, stuttering or backlash by exerting a spring force on the clutch wheel . Two other patents relate to new impact protection solutions. The first is a damper hook that holds the clutch rocker in place during an impact, preventing any disruption or inaccuracy in the chronograph sweep, while the second is a pendulum damper that uses acceleration forces of an impact itself to compensate for the shock throughout the motion, mitigating the risk of components being moved by the force. Finally, the CH 29-525 PS 1/10 caliber uses a patented multi-layer metallic coating to facilitate the assembly of metallic and non-metallic base materials to braze the silicon chronograph seconds hand pipe. 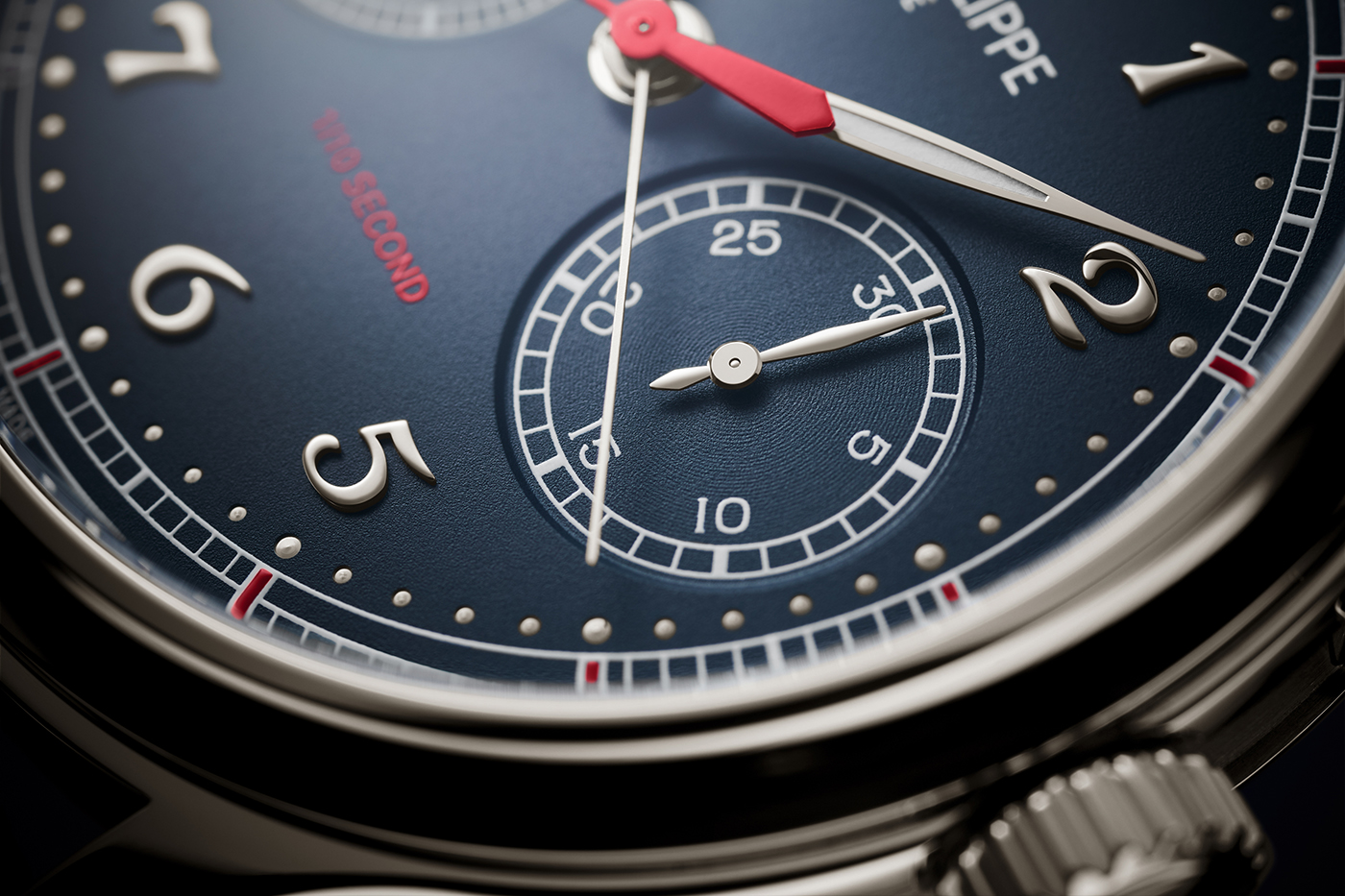 The Patek Philippe Ref. The Caliber CH 29-525 movement of the 5470P also uses Patek Philippe’s unique all-Silinvar silicon escapement system, including silicon parts for the balance wheel (along with gold inlays), hairspring, escapement lever and the escape wheel. Aesthetically, Caliber CH 29-525 embraces the complexity of a hand-wound chronograph layout with an intricate network of slender bridges in a mix of brushed finishes, polished angles, Côtes de Genève and brilliantly polished sinks, with prominent complex elements like the octopus. wheel rising above the intricate symphony of mechanical parts in the images. In terms of performance, this monopusher horizontal-clutch chronograph movement offers a solid 48-hour power reserve at a steady 36,000 bph. Patek Philippe associates the Ref. 5470P with a navy blue fabric effect calf leather strap, with bright red contrast stitching to complete the sporty look. 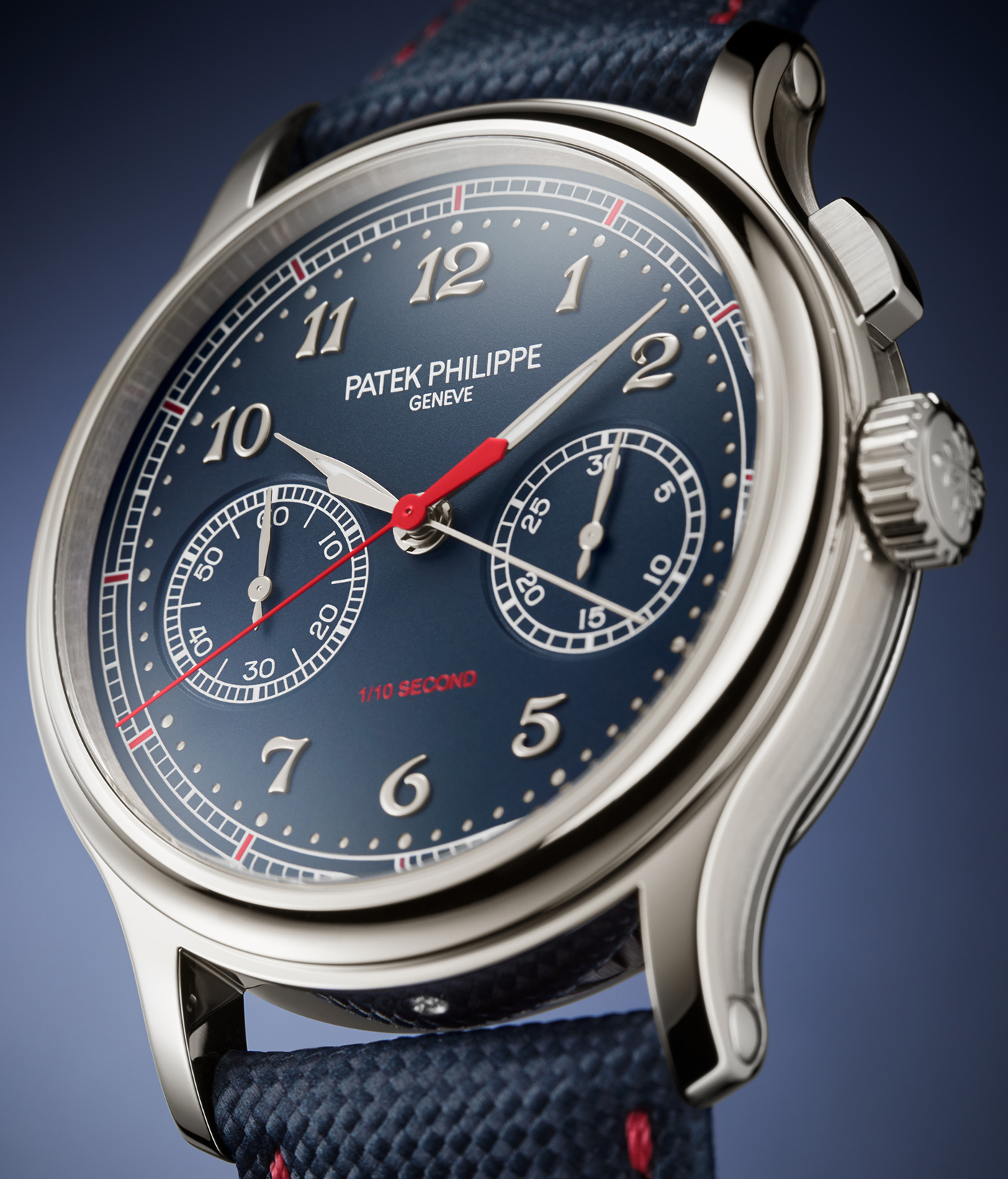 What to watch for in tonight’s Eurovision final