An up-and-coming band from Oxford organizes a benefit concert for Ukrainian refugees.

Electro indie-pop band Brite Spiers are hosting the show at The Bullingdon in Cowley Road tonight, Wednesday April 13, in aid of the Unicef ​​Ukraine Appeal.

The show follows a flurry of London performances by the quintet, founded by Summertown guitarist Drew Atkins.

“We thought about how we could help solve the current crisis in Ukraine,” he said. “We really wanted to get involved and do something constructive, so we decided to do what we do best – play live. It’s our little way to contribute.

One of the most exciting and refreshing bands to emerge from the city in recent years, Brite Spiers are made up of 23-year-old cousins ​​Berry Brown and Betsy Sweeney on vocals, backed by Fischer Luigi on bass, Cal Brumhead on drums and Drew on guitar and synths.

All photos by Ed Nix

Berry, who was born and raised in Oxford and now lives in Witney, has already found success with her 6Music-backed track ‘Check In’. “I’ve often been told that I look like a combination of Lily Allen and Dolores O’Reardon of The Cranberries,” she says.

A constant source of inspiration, says Drew, is David Bowie. “We try to bring his Berlin freshness to some of our songs,” he says.

Betsy, who is a classically trained musician, also works in television and has helped produce shows such as Strictly, Britain’s Got Talent and Love Island.

“I love the lyrical style of St Vincent, the harmonies of Haim and the guilty grandeur of Coldplay,” she says when asked what excites her. 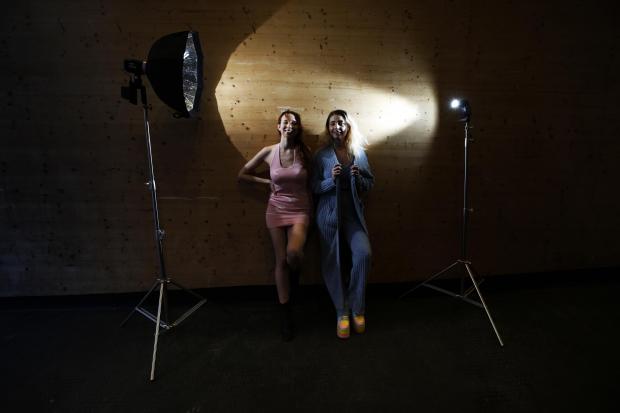 Cal and Drew are no strangers to the Oxford concert circuit, being two-thirds of retro-power pop group The Anydays. The third member, former Oxford Mail journalist Niall Jeger, is currently enjoying his own success with his band Jody and the Germs.

“It’s great to be in a band with Drew because we can relate all the shenanigans that we’ve had in our past musical life,” Cal laughs. “Brite Spiers performs regularly in London now, with very receptive crowds copying the girls’ dance moves and repeating the lyrics to us – which reminds me of old The Anydays shows.”

He smiles as he recalls a particular night in the Italian city of Perugia, Italy. “Man, that crowd was wild!” he’s laughing. “We landed in Italy at 11 a.m. and practically partied until 3 a.m. the next day when the promoter finally said it was time to play.

“I have vague memories of fans in the front row offering us their rum and cokes and invading the stage. then there was the supporting act saying they could drink us under the table…a bet that they literally lost.We last saw them pass out under a desk in the principal’s office.

Drew winces at the memory and recounts another memorable gig in Spain: “We played in Madrid, where a fan was so in love with our bass player that when we left to take a taxi to the airport, she almost got run over in trying to ride with us. !” he smiles.

“Being in a band can be pretty surreal,” says Cal. “I remember when we opened the main stage at the Cornbury Festival, we shared a box with Sophie Ellis Bextor, who was drinking green tea and entertaining her little girl while we shyly drank beer.”

Drew’s references go back to brushes with 90s Oxford icons Supergrass and Radiohead. “It was while I was rehearsing at Cumnor’s Glasshouse that Danny Goffey from Supergrass came over waving at me with the numbers on my phone scribbled on it. The band wanted to try me out.

“Of course I was booked with my boys so this opportunity was delayed until I saw the band’s second gig, after which after 30 minutes of Gaz Coombes jam-style guitar, they ended their set and Gaz immediately came over and apologized. to me they didn’t need a second guitarist. What a nice guy! He should have told me to jog!

He continues: “A similar thing happened with Radiohead. We went over our allotted practice time and they were listening outside. Rather than being annoyed, they actually dug out the big sound we tried. So Johnny Greenwood begins to curiously inspect my pedals and amps. Next thing I know is that my signature “accelerating up and down” guitar tremolo sound is all over The Bends! Pretty flattering I guess!

“They kindly invited me to their home in Cowley Road and we had a nice cup of tea and talked about music. Now that kind of behavior would get me a restraining order!”

“The problems seem to follow us,” adds Berry. “At our last Brite Spiers shoot, we had to fight some techno dancers who obviously hadn’t slept from the night before…and a drunk woman wanted to join the shoot. It would have been nice if the clothes in which she posed had not been stolen from the store next door!

The band formed three years ago with local singer Clare Violet who left for college, replaced by Natalia Stark, before cousins ​​Berry and Betsy stepped in to give what they wanted. describe it as an “Abba meet Radiohead” version of indie-pop electro.

“They’re a band with real chemistry and a unique pop vision,” says Drew.

“We were described as having,” says Drew. “The band has echoes of CHVRCHES and Christine+Queens mixed with LCD Soundsystem and the pop of Dua Lipa and Anne Marie… but as if Robert Fripp crashed the sessions!

“We look forward to seeing as many people as possible at the Bully on Wednesday. It will be fun, but with a serious cause at its heart and hopefully do some good too.

Do you have a story for us? Send us your news and photos here

Register an event for free on our site here

Xiaomi Mi Band 7 launched on May 24